There were some interesting conversations on twitter last evening, so interesting that they are worth some comment.

There was an interesting back-and-forth between @jurgenappelo and @agilemanager about whether it is possible to do Scrum in a “pull” mode or not as well as other issues. But this was just the tip of the iceberg of the Kanban vs Scrum discussion. Here’s one comment that caught my eye:

Here @agilemanager is trying to prove that Scrum cannot be done “right” because of inherent problems, specifically that velocity is so unstable that it cannot be used for planning. That argument, however, is easily proven wrong.
Here is a graph of a team implementing scrum, using velocity to plan for success and with a rather stable velocity. (Technically the velocity is “under control” as defined in statistical process control). 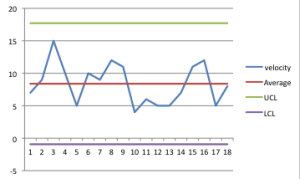 This tells us that it is possible (unlike @agilemanager states) that using Scrum planning based on velocity is possible. And in fact that’s the main long term planning metric that I’ve used in the past with success.
The fact that we have a (statistically) controlled velocity allows us also to do other things like identify common causes and special causes that will require different action/intervention with the team in order to improve their overall result.

Here @jgoodsen is disagreeing with @jurgenappelo’s statement that as Kanban gets wider adoption it too will be mis-applied and lead to failure. This type of extreme position taking is an example of why the discussion between Scrum-mendalists and Kanban-istas is quite useless for the rest of us that are interested in learning more.

The point is: Kanban, just like Scrum, initially is being practiced by early adopters. People that tend to read and study things more and earlier. These are also typically people that are given a license to experiment, to try out new things.
In the end the effect is that, typically, early adopters are better at adopting new methods because they have done that more often (they are early adopters after all). Kanban is just another method/framework/whatever, it will succeed and fail as much as Scrum does. @jurgenappelo is right, any method fails when applied by a population large enough.

The takeaway from this discussion for us should be that methods, ultimately, are irrelevant. It is the learning achieved by experimenting that matters.

We should be sharing our learning, not our method allegiance!

2 thoughts on “The Kanban vs Scrum argument stinks! But, can we learn anything from it?”