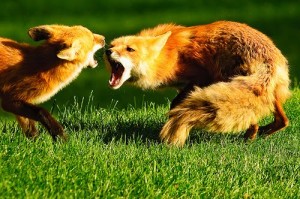 The Scrum vs. Kanban debates rage on in the blogosphere but I can’t help but feel that our Agile community is missing the point.

Where is the “People and interactions over processes and tools” that is part of the core values?

I commented on Rachel Davies’s post about what she calls W-Agile (waterfall disguised as Agile, I guess). In that post she identifies very correctly a typical anti-pattern of agile adoption (read the post, it is worth it).

However in the comments she continues one thread with which I disagree, and I think the evidence for my argument is easily found around us.

Vasco, You say “I disagree with the statement that Kanban can do anything to help the W-agile teams.” I find this an odd thing for you to say and wonder if this is a gut reaction or based on experience?

I have seen Kanban help make the end-to-end workflow visible as a first step to improve those invisible parts. I don’t see doing that as incompatible with Scrum.

My assertion is that Kanban *alone* cannot help where other methods have failed unless *people* change their way of thinking by way of adopting the Kanban (or any other) ideas. Sure, people can change, and many of us have changed our mindset when adopting iterative software development, then XP, then Scrum and recently Kanban. That’s a fine argument to make, i.e.: Kanban can bring things to people’s eyes that other methods have failed to *and* change the way people behave. But that is a totally different than saying “Kanban brings success”!.

Please note that the key ingredient here is not Kanban (or Scrum, or XP), but the fact that people *change* their views, prejudices, etc.

From this quickly follows the following proposition / hypothesis:
A new method can make a team succeed if and only if the person (or people) helping the team adopt the method succeeds in changing the team’s behavior.

Proving this hypothesis is rather simple: just look around you.

Given that a mentor/coach can have a larger influence on the team’s adoption of a method than the method itself, and that the same method can lead to success or failure (Jurgen’s argument as well) then it follows that method alone cannot be a pre-condition for success or for failure.

At the end of the day it is about getting the right help (or changing the help if it is not working) to adopt a method that fulfills your business goals (whatever that method may be).

Agility is about providing business value, not about methods.

3 thoughts on “We continue to miss the point. It is not Kanban vs. Scrum, it is “people over process”!”