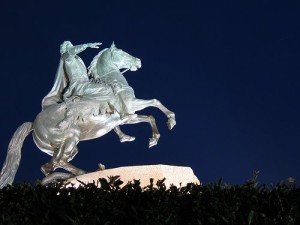 Many of us have been involved in many different communities. Agile Finland for a start. But also other communities: our local kindergarten or school parent’s group, the school or kindergarten itself; the local neighbors; the apartment building executive board (“hallitus” in Finnish), etc.

In fact, if we look back in history all of our history has advanced due to the association of different people, sometimes with similar goals, but much more often with different and sometimes only slightly related goals. The greatest example of all is our very own society which exists and evolves because of the myriad of small communities that interact with each other to achieve a quasi-infinite number of goals.

Why do we need an European Agile community then? Aren’t we already in so many different communities? Why one more?

There are many answers to these questions, but perhaps one that is interesting because it is a true story is the story of Peter the Great (or Pyotr Alexeyevich Romanov for his friends). Peter went around Europe as a young man collecting knowledge, although his initial intentions were to gather support for war (who didn’t, in those times?) he finally ended up touring Europe to learn. He worked in Shipyards, visited Greenwich, learned how to build cities by visiting Manchester (no kidding!). Peter’s journey was one of learning by sharing. He learned by interacting with others, collecting knowledge from many sources and ultimately creating his own view of the world which he implemented back home. Some of it was cargo-cult, but some of it led to lasting changes that we can still see today.

The core of Peter’s story, however, is that he understood that the world was larger than his own Empire, he understood that he had a lot to learn and took a step (literally) towards the communities that were surrounding him. Learned from them and became a better person for it.

How about you? Do you want to become a better Agilist? Join us in the ALE network Vision Helsinki event where we will explore the questions above and more! Check out the details and register here. NOTE: registration is mandatory and seats are limited.