So, as you have probably noticed: winter is coming. With it come the long evenings, the rainy or snowy weather and the unstoppable need to curl up with a good book by the fire place. Perhaps even drinking Glöggi (Mulled Wine). 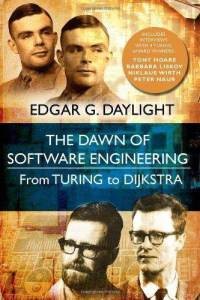 It just so happens that I have found a great book for you! Edgar Daylight wrote and published this year a book about a theme that is crossing our thoughts constantly: Software Engineering. His book is called The Dawn of Software Engineering and looks at that critical time when computer programing was starting to develop. His approach is quite interesting. He revisits the language debate (which is still raging today): should languages be designed to run fast (computer-oriented) or should they be more “readable” by humans (people and readability oriented)? Although this debate takes a different form today (interpreted vs compiled languages) it is an illustration of how some debates are still alive today in the Software Engineering community. I had a lot of fun reading about those debates as they happened in the 70’s! 🙂 There are other interesting accounts, like why LISP became a functional language (did you know it was not supposed to be that way?) But what I found most interesting aspect of the book was the historical account of how some programming languages got developed and led to the development of different hardware. The way Edgar Daylight describes the interplay between languages and hardware design is truly fascinating and a must-read for anyone interested in the history of our profession: Software Engineering. Happy readings! Full reference: Edgar G. Daylight, The Dawn of Software Engineering – From Turing to Dijkstra