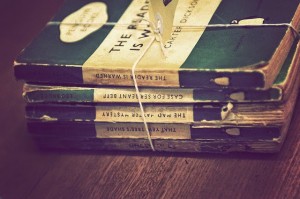 A friend shared with me a few stories about how Estimates are destroying value in his organization. He was kind enough to allow me to share these stories anonymously. Enjoy the reading, I know I did! 🙂

The story of the customer that wanted software, but got the wrong estimates instead

Once, one of our customers asked for a small feature and, according to this customer it was quite clear from the beginning what he wanted. Alas, in my experience things often don’t go as planned and therefore I have added a good buffer on top of the needed estimates. Just like all developers I know do. Every day.

However, the story was about to get more interesting. A bit later, the sales team said those numbers were too high. “The customer will never accept those numbers!”, they said. “And we really want this case.”

After much negotiations we reduced our estimates. After all, we had added some buffer just in case. So, we reduced the estimates on the account, and I heard myself say (I should have known better): “Well, I guess that if everything goes well we could do it in that time.”

The result was that the project was delivered late, we exceeded the estimates we gave. However, I did learn a valuable lesson: If you are forced to create estimates and the customer requires fixed price then never obey wishes from sales team: their target is different. Or, alternatively just do away with the estimate process altogether: just ask the sales team what number they want to hear ;-).

A few months ago a customer called in and requested a small feature for their existing product. They were asking for an estimate. Part of the work was very clear and would be very easy to implement. But there was a part that wasn’t that clear. After some pre-analysis and discussions with other development team I knew about what would be needed to finish the job. Unlike the story above, this time I knew the customer asked for a Fixed Price Project and therefore added some buffer – just to be on the safe side.

After carefully estimating the work with the team we sent the total estimate to the sales team. This estimate included everything that was needed: from analysis, implementation, test, deployment. I did not split the estimates into its components parts because I didn’t want the customer to think that testing would be optional (Yes! It as it has happened before).

However, the sales teams split my estimate into the different roles. Big mistake! Magically the estimate that the customer received was half-day shorter than the one we provided. Not a big difference, but I learned my lesson!

Surprise number two was about to hit me: The customer said they hadn’t used some hours from a previous contract and that they should get a discount. Long story short, when the project was started we had to reduce our “cost” to 50% of the estimation I had originally given to the sales team. I learned that I should never trust the sales team with mathematical calculations!

We did manage to deliver the feature to our customer, thanks to some very aggressive scope management, this meant that we had to deliver functionality that was requested, but did not perform as well as it could have if we had been allowed to work on the feature from the start, without the estimation back-and-forth.

I did learn my lesson: If you sales team doesn’t know how to sell software projects, and before you given them any estimates, add even more buffer on top of things learnt from the previous story! ;-).

Estimation as an organizational smell

Certainly there are many organizations in the world that do not go through similar stories as these. However, many still do! For those organizations that are affected by stories like these I suggest that we look at different ways to manage software projects. #NoEstimates provides a clear alternative that has proved very successful in the past. For example, in the paper below I mention a story where a team would have given an estimate within 4% of the actual time it took the project to complete, if they had used #NoEstimates! 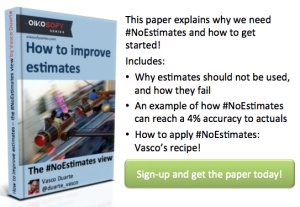 The story continues, however. Here’s what my friend added at the end of his email:

Well, after all having successfully changed the mindset of many in the company and in our team. We are already doing quite well.

Now I do things differently. The first thing I always discuss with the customer is how much money they would like to spend for the work they want to have done. This already gives me a good picture if we are even close in understanding of the amount of work that is necessary or more in the direction of “insane”.

Today I don’t negotiate traditional contracts with my customers. Every job is now build on trust, communication and transparency.